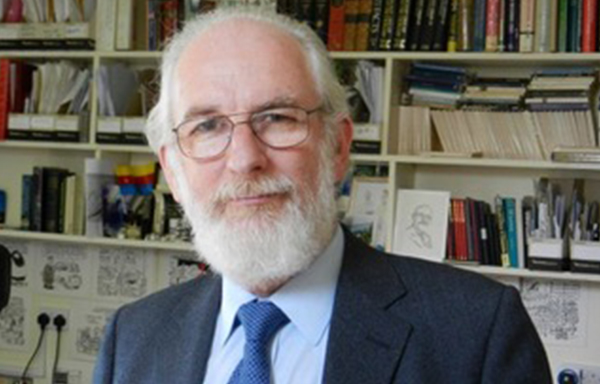 David Crystal’s article ‘The Playful Story of English Grammar’ is featured in our latest publication of The Link.  We had many positive responses to the article and lots of entries for our prize draw for David’s book ‘Language Play’.  Congratulations to the lucky winner, Liz Greenfield from London – your copy is on its way to you!

David’s article prompted questions from our readers which David has been good enough to answer.  Read on to find out more about the world of language……

Should we worry that our students use ‘like’ as a filler?  It is one of our whole school priorities to promote clear and fluent speech and this is a bugbear. Is it something we should be aiming to stamp out or is it too culturally embedded, and what is the best way to retrain out pupils to avoid it, if this is possible or desirable?

Thank you, Alison Head of Individual Needs from Elstree.

Technically, it's a quotative, in most of its uses. What does that mean? If we take 'So I'm, like, wow', and we wrote it down without the 'like', it would come out as: 'So I'm [saying] "wow".' That is, the 'like' replaces the quotation marks. That's why it's so common, because it's being used in narratives. It also has an intensifying function, focusing attention on what is about to be said.

Used with moderate frequency it would never be noticed. In fact, similar uses have been in adult colloquial narrative language a long time, especially in some parts of the country. The OED has a quotation from Thomas de Quincy in 1840 in which 'like' is used three times in quick succession. But the modern high frequency quotative usage is American in origin, dating from the 1970s. And it's the frequency that is the irritant. Any word or phrase that is used with great frequency attracts disapproval, and for good reason: the usage draws attention to itself, and thus distracts from what is being said. It will be especially noticeable by people who do not use it in this way.

The problem, therefore, is overuse. It's not really anything to do with clarity and fluency. It's perfectly clear what is being said, and it actually aids the fluent telling of a story. But it is hugely informal. So students need to be made aware of the importance of informality/formality variation in English, and learn to control it. Not easy, for kids who have it as a habit. The first step, though, is not to condemn it, but to point out its linguistic functions, in contexts where the usage is acceptable, and then to show how there are alternative expressions in other, more formal contexts. It should not be a question of 'stamping out', which is unlikely to succeed, but of fostering a controlled awareness of usage.

Hi – I am a great fan of your language and rhetoric, and would like to ask David, of all the literary devices, which is his favourite and why… / or which one does he think is underused?

I don't have linguistic favourites. Or rather, I find all devices of this kind are joint favourites. In some contexts, device X is clearly the perfect expression; in other contexts, it is device Y. I can't choose. The one I happen to be studying at any point in time is, for that moment, my favourite! For instance, in my book ‘The Gift of the Gab: How Eloquence Works’ I spend quite a lot of time exploring 'the magic number three', and this has been a front runner in my favourite stakes for a while. You know the sort of thing: politicians do it quite a lot - 'I was with you yesterday! I am with you today! And I will be with you tomorrow!' (cheers). But everyone feels the value of a triplet. The first instance introduces a theme; the second one focuses on it; and the third one makes the point more memorable, often in the form of a prosodic climax.

Our language is evolving all the time ‘moobs’, ‘YOLO’ and ‘bromance’ and other ‘made up’ words all now can be found in the Oxford dictionary.  How does a new (slang) word end up becoming part of our language?

By being used by people other than those who originated it, and over a longer period of time. Slang is typically socially restricted and short-lived. But a slang term that is felt to be useful will lose its restriction and eventually become standard. An example is 'bus', thought of as slang in the Victorian era (short for 'omnibus'), but part of standard English today.

Are there any current ‘new’ words that you think may end up in the dictionary?

Impossible to predict the future, when it comes to language change. New uses of words are evolving all the time, and some will survive, and some won't. To take a contemporary survivor; 'Brexit' is already being used in contexts other than its originally political situation. Just the other day I heard a man tell off his dog for doing something naughty and ordering it to go to its basket with a loud 'Brexit!'

With regard to the way we pronounce words – do you envisage a time where ‘f’ will be an acceptable way to replace ‘th’ in the spelling of words such as thing and think?

Anything can happen. This has long been normal usage in some regional accents, such as Irish English. But I imagine you're thinking of the way it has been spreading from London Cockney into the Home Counties, and is now being heard much further afield, in accents that traditionally would not have used it. Note that the spread doesn't happen all at once. Some words will accept it more readily than others. It will be more likely to be heard at the ends of words (as in 'Hampstead Heath') or the middle of words (as in 'Heathrow'), rather than at the beginning. Whether it will become part of the educated standard will depend on the social standing of the people who eventually come to use it. At present, there's little sign of this happening, mainly because literate people give priority to the orthography (e.g. many pronouncing the 't' in 'often' 'because it is in the spelling'). So, the 'th' pronunciation, which has an ancient history in English, dating from Anglo-Saxon times, will be difficult to displace.

As patron of the International Association of Teachers of English as a Foreign Language (IATEFL) I wonder if you would give our schools some advice about teaching grammar to children for whom English isn’t their first language.

Firstly, how essential is grammar when learning a second language? Should we present grammar to children with EFL in the same way we would native English speakers? If not, what approach should schools use?

I am an unusual patron for IATEFL, as I am not, and never have been, an EFL teacher. So, I leave questions of advice and approach to those who have to deal with this in class every day. But there are some perspectives that I think teachers do need to bear in mind. I've written a whole book about this, so it isn't really possible to summarise it in a blog (see my Making Sense: the Glamorous Story of English Grammar). But the essential point is not to see grammar as separate from other areas of language, especially semantics and pragmatics. That is, when dealing with a grammatical construction, we must always ask 'what does it mean?' and 'how is it used?' Semantics needs to be at the heart of grammar. Grammar exists to make sense of words. Words by themselves do not make sense. And grammar also enables us to express and remember complex thoughts.

The trouble starts when people treat grammar as if it were a separate testable subject. Many people (including the government) think that being able to identify a noun or a preposition (or whatever), or to analyse a sentence into subject and a verb (or whatever) is what grammar is all about. It is not. Analysis and naming of parts are useful skills, but they are only a tiny part of the subject. To make grammar meaningful we have to ask why we need nouns, prepositions, etc, and explore the exciting ways in which they are used in real situations - as in the Poppy story I told in the Link article. I see no difference here between native and non-native speakers, in this respect.

What is the best advice you can give teachers and support staff when working with children who have EFL?

Acknowledge their world. It is a new world, in which the screen is central and social media is dominant. It's therefore crucial to respect this, and spend time getting to know it, and not believing the myths that are commonly found in the media. How often have you heard it said that some new medium (text messaging, Twitter...) is destroying young people's linguistic ability? All the evidence points in the other direction. And very important too is to keep up to date. For example, teenage texting practice today is totally different from what it was fifteen years ago (abbreviations are just not cool anymore). When I go into schools, I try to spend as much time as possible listening to what the students say and how they are saying it. I learn something new every time!

David Crystal, OBE, FBA, FLSW, FCIL is a British linguist, academic and author and is now Honorary Professor of Linguistics at the University of Wales, Bangor.