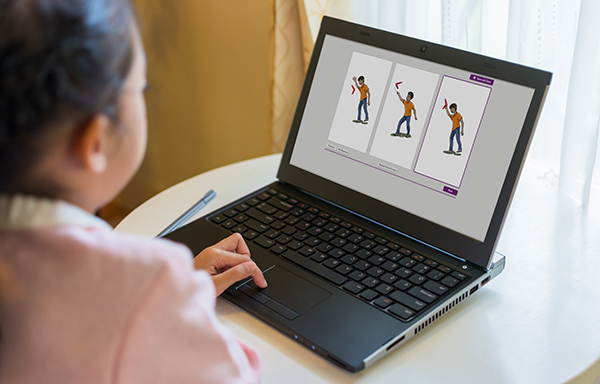 When working in schools, I was often asked about the impact of screen time on children’s language and communication skills. There would frequently be concerns raised about the amount of time children spent in front of screens outside of school and the perceived impact that this was having on their ability to focus and attend to tasks. I knew that there had been studies looking into the impact of excessive time spent watching television on health, but was unsure whether these findings could be applied to other screens, particularly smart devices which are much more interactive and are likely to impact differently on areas of language and communication.

When talking about screen time we mean any time that a person spends looking at a screen including TV, smart phones, tablets, computers and games consoles. This can include passive screen time, such as watching a video, or active screen time, such as playing a game where there is an element of interactivity. The use of screens and digital devices has significantly increased over the past decade and is evolving rapidly in terms of use for socialising, education and industry. The average age for children to have a smart phone is now 9 years of age and younger and younger children have frequent access to screens.

Parents and professionals have expressed the need for clear guidance about screen time use, due to the large amount of anecdotal information online stating the detrimental effect of screen use on children’s development. Worryingly this information can easily be interpreted as real evidence against the use of screens with children and there is often a perceived negativity towards their use. But what does the evidence actually say?

For the UK, the Royal College of Paediatrics and Child Health published a guide in January 2019 which summarises evidence of the impact of screen time on health and provides advice for parents and professionals. You can view it  here. They found that although there is evidence for an association between screen time and obesity, and depressive symptoms, it is difficult to determine a direct cause. The association between screen use and educational outcomes was found to be even weaker. They concluded that the evidence for a beneficial or detrimental effect of screen time is very weak overall and as a result they are currently unable to make recommendations about screen time limits for children.

In contrast, in Canada and the USA, experts do make recommendations about screen time limits. They advise that children should not use screens before they are at least 18 months old and that children between 2 and 5 years old should have limited screen time, under 1 hour per day. These guidelines, however, have been criticised as not being fully evidence based. The evidence of harm is often overstated and there is a focus on the potential risks of using screens, rather than the potential benefits.

As a result of this conflicting advice, there have been calls for further research to be conducted to explore the effects of screen time on health and well-being. Two studies published this year have looked specifically at the impact of screen time on language development…

A study completed in France (Collet et al 2019) found that children exposed to screens in the morning before nursery or school, were three times more likely to develop a language disorder. They looked at exposure to screens at different times of the day and morning exposure was most linked to language difficulties. Previous research has shown the impact of fast-paced activities on executive function in children, exciting and exhausting them, so the authors have hypothesised that screen exposure in the morning may affect children’s ability to acquire knowledge and learn for the rest of the day.

Another study completed in Korea (Moon et al 2019) looked at the relationship between the use of smart phones and/or tablets and language development. Similarly, they found that as screen time increased, expressive language skills decreased for 3-year-old children. The study recommends that screen usage time is reduced to improve language development in children.

Although these studies indicate a potential impact of screen use on language development, further research is needed to build the evidence base around this area. So, while we are waiting for clear guidance on screen time limits, what advice should we be giving to parents (and using ourselves)?

Interact with the child around what they are watching or doing:

In both the France and Korea studies, an important factor was found to be whether the screen content was discussed with the child by parents. Children whose parents rarely or never discussed the screen content with them, were six times more likely to have language difficulties. This indicates that the use of smart devices may not be detrimental to language development, but it depends on how they are used. Children are not likely to learn anything, particularly during passive watching of videos, if there is no discussion or interaction around this content. It is recommended that parents interact with children around what they are watching or doing, and this will help them to understand what they are seeing and apply it to the world around them.

Make sure there is a balance of screen time and other activities:

One of the reasons hypothesised for possible detrimental effects is that the use of screens may reduce time for other positive and important activities, such as sleep, exercise and time spent interacting with others. The main recommendation made by the Royal College of Paediatrics and Child Health is for families to negotiate screen time limits based on the needs of the child, the ways in which screens are used and the degree to which the use of screens reduces time for physical and social activities, and sleep. We know that the best way to develop children’s language and communication skills is through everyday face to face interactions, for example during bath time, meal time or going to the park, so it is important that face to face interactions are prioritised. It is also important for parents to consider whether their own use of a screen or smart device is blocking a potential opportunity for face to face interaction with a child.

Most experts advise that children (and adults) are not exposed to screens for an hour before bed, as the stimulation from the light of the screen is thought to affect the brain’s ability to wind down. The adverse effects of sleep deprivation on health and wellbeing are well documented, including difficulty concentrating, difficulty remembering information and poor mood.

Set clear boundaries around screen time use at home (with parents also sticking to them!)

It can be beneficial for families to create rules for screen use at home together, as it is important that everyone understands these and sticks to them, including the adults who need to provide a good role model of screen use. This could include designating screen free times (such as during dinner) or screen free zones (such as bedrooms).

Be realistic and acknowledge the positives:

Most (if not all) parents will regularly use screen time to enable them to get on with a task, give them a well-deserved break and to provide down-time for children at the end of a long school day. Writing this blog has made me think about my own screen use (especially the time spent writing this at my computer). On pretty much a daily basis I watch TV in the evening with my partner, read my book with an e-reader before going to sleep, and meditate using an app on my smart phone. It is important to acknowledge that there are lots of positives around using smart devices including the development of fine motor skills, problem solving skills, productivity at home and at work, and the ability to keep in touch with family and friends. Time spent on screens is a major part of modern life and, therefore, a necessary part of modern education. It is important that we provide parents with the facts around screen time use, including acknowledging the potential positives and negatives. As with most things, it is about having a healthy balance of activities that enable us to achieve and be happy.