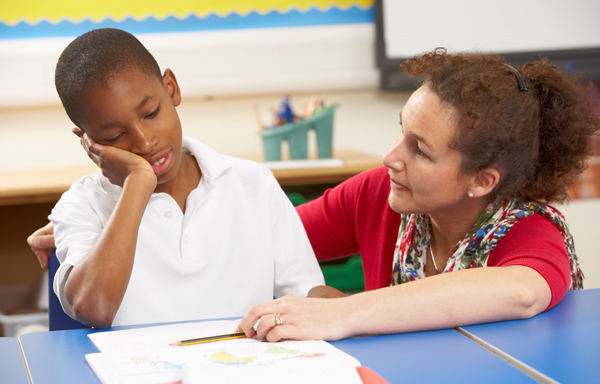 During lockdown, while working from home, I listened to a brilliant podcast from the SENDcast talking about exclusion in our schools. The question being asked… why is it that boys, children with SEN, children from lower socio-economic backgrounds and those from black or minority ethnic backgrounds are so much more likely to be excluded? Why is there such a difference for these children? And does it reflect our subconscious perceptions (and bias) of some children and their behaviours?

Whilst listening to the podcast, I almost immediately thought of Zane*, a pupil that I worked with through a Kent inclusion service.

Zane moved to Kent to live with his Mum when he was in Year 8, following his permanent exclusion from a school in London due to challenging behaviour. Zane was of mixed ethnicity, white and black Caribbean. He had previously lived in London with his Dad, and his Mum had been concerned about the level of gang culture that he was being exposed to.

After the move, Zane was enrolled in a secondary school in Kent, however this placement almost immediately broke down. Zane was placed in isolation from his first day at the school and quite quickly was at risk of permanent exclusion. A referral was made to the inclusion service to try and support Zane’s placement and that is how I became involved.

School staff described Zane as ‘loud’ and ‘aggressive’ and the main reason for his internal exclusion was that he ‘refused to follow basic instructions’. He was described as being a ‘ringleader’, involved in gang culture and using lots of inappropriate slang and colloquial language with staff.

Zane started attending school at the inclusion advisory service, in order for assessments to be completed to understand his needs and to support his re-integration to mainstream school. As part of this I completed a language assessment with him. I spent time with Zane in lessons and he engaged in 1:1 sessions for formal assessment. The assessment found that Zane met the criteria for Developmental Language Disorder (DLD). His particular areas of weakness were in processing spoken information, understanding and using vocabulary and verbal reasoning. This significantly affected his ability to understand spoken information (particularly instructions!) and to be able to read between the lines to understand implied meaning. These key skills impact on everything that Zane needed to do to be successful in school. Zane was 13 years old at the time of the assessment and had not received a language assessment up until this point.

Thinking back, I remember that Zane was very slight and quite petite for his age. He mainly used colloquial language and slang when he was talking, which was not always appropriate for his audience. This could easily be perceived as disrespectful, indifferent or uncaring, but this was the language he was able to use the most successfully, that represented him (a child that grew up in London) and he felt comfortable with. When he said, ‘I got no clue what you talkin about bruv,’ this was the only way he was able to say that he didn’t understand. When presented with a bit of work and he said ‘got bare lines’ he was expressing concern about having to do lots of writing on a page. It was also the only way that he could integrate himself with his peers, to jostle for position and to try and appear confident, as he didn’t have the sophisticated language skills to extend and develop friendships. His behaviour could be pretty challenging at times; walking out of lessons, swearing and kicking furniture, but he responded really well to visual support, reduced language and explicit and consistent expectations.

Behaviour of any kind needs to be seen as communication. Within school, Zane was constantly being put in a position where someone was doing something to cause him pain or distress; giving him instructions that he didn’t understand, punishing him when he didn’t complete his work, telling him that he was being rude or aggressive – it is unreasonable to expect a child not to react in this situation. For many young people being moved out of class (or even school) for behaviour is preferable to it being discovered that they don’t understand or have a clue what they are meant to be doing. So much of the restorative work to deal with behaviour is completed through language; discussing what happened, what the child could have done, what they will do next time – most of the time Zane couldn’t understand what he had done that had resulted in him getting excluded, so how was he meant to make sure it didn’t happen again?

From day one at his new school in Kent, Zane was put into internal exclusion, for refusing to follow basic instructions – it was felt that he ‘wouldn’t’ do this, rather than the reality that he ‘couldn’t’ do this. Internal exclusions are meant to be a technique used for a short period of time, to support a pupil to regulate and calm down. Used for a long period of time, as with Zane, it has been found to have more of a severe effect than solitary confinement. I can’t imagine being forced to work alone, have lunch alone and be escorted to the toilet.

Exclusion does have its place and is sometimes necessary to protect the child, other pupils and staff. I believe that the challenging behaviour that resulted in Zane being excluded from his previous school was likely to be a justified and appropriate use of this process. But, it is about the steps that led up to this point and the steps following it, that were not taken for Zane. As a result, he has missed out on many years of his education and this will have a life-long impact for him.

Children with SEN, children from lower socio-economic backgrounds and those from black or minority ethnic backgrounds are already so often at a disadvantage in school. We need to look at behaviour differently so that all pupils have the opportunity to achieve. Here are some of the things that we need to think about differently:

Have you thought about language?

We know that huge numbers of children and young people presenting with challenging behaviour have, usually undiagnosed, SLCN. If you have concerns about the behaviour of a child that you are working with, you need to make sure that their language skills have been assessed. If Zane’s difficulties were identified earlier, strategies could have been put in place to support him, which are likely to have enabled him to remain in school. Zane really flourished within the inclusion advisory service because quality first teaching strategies were used consistently. When used as part of the whole school ethos, they were just part of the furniture and not something Zane felt was only for him. Used consistently, these strategies support all children to be able to engage successfully in their learning. One of the difficulties in school is that SEN is often seen as something only the SENCo needs to know about, but teachers have a vital role in shaping the experiences and outcomes of their students. Having a better understanding of pupils will save time and resources, decrease stress and improve results, as well as having huge benefits for the children.

What is their behaviour communicating?

Have you changed what you are doing?

More of the same does not work; if it has failed before, you are setting the child up to fail again. We need to shift our perspective so that we are not just asking the child to change what they are doing (which it is likely that they can’t) but we are also changing what we are doing, or what is happening in their environment. Use visuals, like comic strip conversations, to talk through behaviours or events that have happened, so that you are not just relying on spoken language.

Are you being affected by subconscious bias?

More and more research is indicating that we all have automatic thoughts and ideas about others, that result in unconscious and subtle changes to our behaviour. This could be the subtly different ways that we respond to boys vs girls, old vs young people, children with SEN or children from different ethnic groups. All of us have been outraged at the open racism and horrific events that have recently (and historically) happened, both in the US and UK. But it is the subtle, unconscious and, often, institutionalised racism and discrimination that we all need to better understand, in order to change our practice – and I include myself in this. Currently a disproportionate number of pupils from certain ethnic minority groups are more affected by school exclusions and this in turn compounds preconceptions of race and behaviour. For example, because of clothing they wear, or different hair styles, BAME children are more likely to be viewed as ‘disruptive’ or ‘loud’. I cannot say whether Zane’s ethnicity affected the perceptions made of his communication and behaviour, but I do wonder whether it played a part in a small, petite, young boy being seen as ‘aggressive’ and ‘loud’. We need to have important conversations about race and racism in our schools to try and reflect honestly on any underlying views and biases that we subconsciously hold.

For more information about race and racism in schools visit:

*names have been changed for this blog